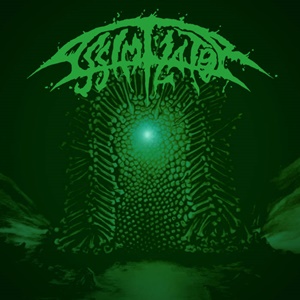 Rising out of the remnants of Death on Fire, Assimilator is a four-piece outfit from Indiana – wasting no time establishing themselves through a self-titled debut album. Diverse influences allow the band to develop a sound that is underground at its core, intertwining aspects of old school death metal (especially of the Swedish variety) plus gritty thrash and hardcore aspects. The down to earth values, tones, plus primitive, in your face production qualities ensure these musicians put the focus on the performances, music, and songwriting – which at this point may need a bit more tightening/polish to gain more buzz.

A relatively bluesy/calm guitar intro shifts quickly into a melodic death riffing plus a driving snare/kick tempo foundation through “Slave”, while the follow-up “Burial Hymns” contains a see-saw battle between slower, churning rhythms, semi-progressive hi-hat snare foundational components, and the caustic vocal roar pushing over the top. It’s as if these musicians aren’t afraid to add a bit of sludge or southern stomp to the heavy, discordance – the groove accents serving as a cohesive part to the driving, aggressive rhythms and equally chaotic screaming/commanding vocals that penetrate every track. What’s refreshing in terms of the sonic output is the lack of pristine digital-enhanced tricks – the in your face aspect of the guitars, bass, drums, and vocals launches through the speakers, making “Like Whispers Singing” and “The Dying Light” standouts, the latter featuring some sinister doom-like dirge against the swinging hardcore-oriented drum passages. The struggle for full recommendation of these nine songs lies in some of the minor details that aren’t exactly up to the standards most expect in an OSDM meets thrash/sludge act. Often the lead breaks don’t match up well to the arrangements, sometimes featuring out of key notes – and the vocals will be a love it/ hate it aspect for some listeners, as the raspy, barking roar has its appeal but could wear tiresome for others.

Possibly a case of time, road work, and rehearsals getting those kinks worked out long-term. As such, Assimilator could appeal to those who love a rougher exterior in the thrash/OSDM platform.