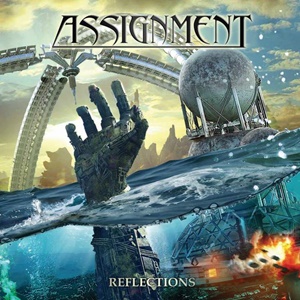 Evolving from thrash/death roots on their demo tapes during 1996-97 into a progressive metal outfit, German act Assignment have been climbing the ranks independently and through smaller labels, finally signing to Massacre Records with their fourth record Closing the Circle in 2016. At this time singer Diego Valdez joined, well known amongst the power/progressive circles for his work in Helker, Iron Mask, and Dream Child to name a few – bringing us to their latest studio effort in Reflections.

These ten tracks cover everything on the topic end from NATO bombings in Serbia to family break-ups, as well as a couple of songs that pick up the story told on their 2013 record Inside of the Machine with “Unknown Hero” and “Silent Nation”. Musically the band stride forth in a melodic progressive metal way – keyboards and guitars providing the main hooks and energetic intricacies that the rhythm section play off of, allowing the wide array of melodies from Diego to shine as he’s best known for his chameleon-like channeling of Russell Allen and Ronnie James Dio. It’s evident that acts like Dream Theater and Symphony X factor into a lot of the sweeps and synchronization when choosing to be intricate or dexterous during instrumental sequences of “Corporate Men”, but there’s also that smart circular nature to other segments for “Timeline” that catch the head and keep bodies tapping along – Assignment aware of the balance between power/progressive prowess while writing and performing memorable, distinctive songs. Guest female vocals by Maria Jose Pot and Ines Vera-Ortiz appear with Diego on songs like “Reflections” and “Endlessly”, allowing these songs to blossom into more alluring duet angles – the former a semi-ballad featuring shuffling snare/cymbal spots with the latter being a bit more theatrical/cinematic from a Savatage meets Avantasia-like stance, the guitar/keyboard harmonies enticing and exhilarating. At ten tracks and almost an hour of music to process and consume, the quintet explore enough terrain with softer/louder parts, harmony and melodic lines, as well as pushing the parameters of their abilities that most will not be bored through the proceedings.

Reflections keeps this German band firmly in the power/progressive metal landscape and deserving of your attention, especially if you want dynamic contrasts plus edge of your seat anticipation track to track.