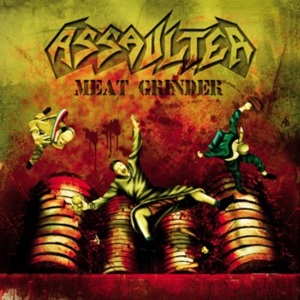 The long-term appeal of speedy thrash resides in the intensity of riffs, tempos, and vocals that combine for vicious songs. A rabid animal that can be tenacious, a tad unpredictable, yet cause massive damage as hearts race and bodies hurl against the aural activity. Assaulter subscribe to that ‘pummel first, ask questions later’ tact on Meat Grinder, their first full-length in their decade long existence, following up a 2011 Crushed by Raging Mosh self-released EP that got picked up by current label EBM Records for wider worldwide push the following year.

What listeners can expect out of these 10 tracks are heads down evil thrash riffs, gang screams for choruses, plus solos and tempos that go for the jugular, without regard for necessarily note perfect fluidity – it’s all about aggression here folks. The venomous picking swarm by the guitar tandem of Gigi and Paolo during “Pay to Play” and “Assaulter” proves these gentlemen studied many of the Hanneman/King tricks that made Slayer favorites during the 1980’s. An appreciative uptick in pronounced bass tone from Enzo occurs in many instrumental segments – using wah-wah effects plus progressive passages to give Assaulter more of a Metallica/Maiden-esque bottom end edge at times. When the band chooses to transition away from the blitzkrieg speed, the stop/start segmentation and pit maneuvers rally the troops into combat mode – the title cut and “After the Countdown” two winners in that shifting momentum model. And for those who love a quick hitting, punky/thrash/crossover arrangement in the S.O.D./ D.R.I. mold, look no further than the 42 second “L.M.T.” Enzo also handles the vocals, and his screaming/ barking nature has a familiar Araya-ish rasp in controlled sections of “Liesocracy”, but for the most part comes off in an old school hardcore vein that is forceful but not melodic in any shape.

While admirable from an intensity and execution standpoint, Assaulter aren’t really reinventing the wheel with how their influences come through in the songwriting. If you miss early Slayer and some of the Teutonic bands when thrash was initially crushing the underground – Meat Grinder could be appealing. Let’s just hope that the band use an obvious bass playing difference maker to their advantage on future recordings. 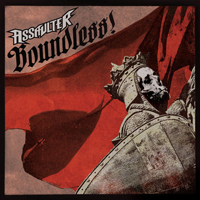