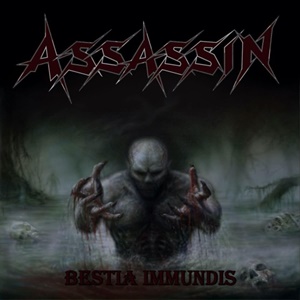 Part of the original German thrash wave of the 1980’s, Assassin released two albums through Steamhammer in the 1980’s before breaking up in 1989. Finally deciding to reunite in 2002, they’ve released three more records and significantly changed members, as guitarist Jürgen ‘Scholli’ Scholz is the lone early survivor – the rest of the current lineup going back to 2009. A significant uptick with veteran credibility occurred in 2016, as Sodom guitarist Frank Blackfire joined the band – bringing you up to speed for the sixth studio record Bestia Immundis.

Referencing the ‘unclean beast’ which is the Latin translation of the title, there is not just a Book of Revelation aspect to this but also a secondary general person level element to most of the lyrical content – covering topics from rebelling against social norms, fake news in the modern media, and Donald Trump’s wall plans. The quintet approaches their music in a potent, in your face manner – relentless and savage when necessary, but also adding a bit of a punk/hardcore aspect as well as incorporating a few modern nuances to keep the record dynamic and interesting front to back. The heads down blistering guitars and equally brutal rhythm section support for opener “The Swamp Thing” reveals a love of Slayer and Sacred Reich, the simplified chorus giving Ingo Bajonczak (also of Bonded) verbal reprieve while he keeps pace for his main verse in accelerated hyper-speed. Frank and Jürgen often place themselves in twin sonic angles that fill the landscape in fulfilling anticipation moments – the stair-step action and atmospheric activities for “No More Lies” or the darker, stunted proclivities for the instrumental “Chemtrails (Part 1)” showcasing left-field techniques beyond their obvious speed riffing and natural transition abilities. A longer song like the 6:10 “The Wall” gives Assassin a chance to build out specific riffs and showcase a bit of their musical interplay, injecting some circular melodic runs a la early NWOBHM to the powerful template.

There’s added emphasis on gang-infused choruses, which can make retention of this material much easier as it’s hard to get specific songs out of your head. You would be hard pressed to miss the rhythm-infused, almost modern touch to “How Much Can I Take?” – it is so incessant (and present) within the song, that it could be a fan favorite or nails on the chalkboard painful depending on your stance (this scribe is on the fence currently for this one). Overall Bestia Immundis keeps the speed, intensity, and natural thrash aspects at heart – and should go down a storm for not just Assassin maniacs, but most followers of the German movement. 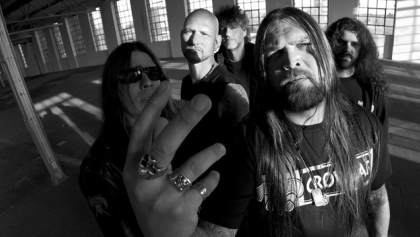