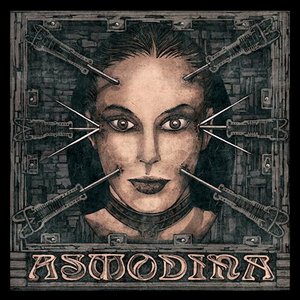 For those not in the know, Asmodina was the starting point for Angela Gossow, who of course became rather well known for her stint as Arch Enemy’s vocalist (and now manager). Asmodina was the first act she was involved in, and Inferno is being given a reissue 23 years later by Apostasy Records. A fine thing, as it was quite a price-y collector’s item for those seeking a copy and this makes an easy way to hear Gossow’s vocal origins.

At this point in the game, the main draw here will be Gossow’s vocal performance. It’s pretty raw death metal, an apt sound for the late ‘90s, and one that’s rather ferocious. Thus, Gossow’s vocals are quite frankly, more demonic than on any Arch Enemy track. Her snarling presence is notable, and fans will not be disappointed in what they hear. You can hear a youthful hunger in her performance that gives the songs a more visceral impact. Outside of that aspect, it’s solid death metal. There are some notes of doom occasionally, as well as some synths that weave into a few parts to give it a slightly eerie feeling and some melodic parts with guitarwork, but it’s all about that aggressive energy. Not a bad thing to this scribe, but it’s nothing really world-changing either. The production isn’t the strongest, but again, this is a 23 year old release so that’s to be expected.

Inferno is an enjoyable enough record, mostly from the perspective of seeing Gossow’s starting point from the vocal perspective. But for a mid ‘90s death metal release that had very limited production at the time, it’s worth a listen. A treat to get a reissue on such a buried release, and this should give it some fresh ears to check it out, along with the bonus of some added demo tracks.