Ashenspire – Speak Not of the Laudanum Quandary (Code666) 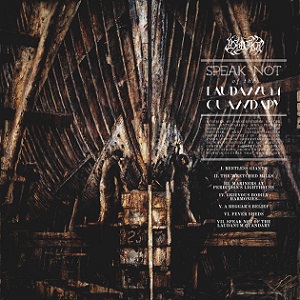 Sabbat/Skyclad vocalist Martin Walkyier remains unequalled in the world of British metal lyrical exploits. Far from a technical singer (he was primarily monosyllabic), Walkyier’s incredible grasp of the English language allowed him to embed puns, allegory, metaphors, and a thoughtful worldwide view into both Sabbat’s, and especially Skyclad’s music. In fact, so good was/is Walkyier, that many would listen to the aforementioned bands just to dive into his vast world of gab. Now, Ashenspire vocalist/creative director Alasdair Dunn may not quite be at Walkyier’s level, but one thing’s for certain: Speak Not of the Laudanum Quandary is his show.

Formed in 2013, this Glasgow-based theatrical metal unit fall under the same avant-garde banner as A Forest of Stars, Solefald, and Vulture Industries. Not exactly palatable music, Ashenspire is basically a platform for Dunn’s well-mannered, but aggressive sing/speak vocals. Because of his Scottish accent, Dunn has a sort of intellectual, high-brow flair often not heard in avant-garde music. He’s often accompanied by a steady dose of violins, along with discordant, off-kilter riffing, the likes of which benefit “Grievous Bodily Harmonies” and “Fever Sheds” immensely.

There are certainly several elements of Ashenspire that are intrinsic to them and them only, which puts the band off to the right (or center) of wherever avant-garde metal is these days. Speak Not of the Laudanum Quandary is not an easy album to get into, though. This could be the result of too much Dunn, but then again, there’s no one better equipped to speak the King’s English than a theater-bound Scotsman.