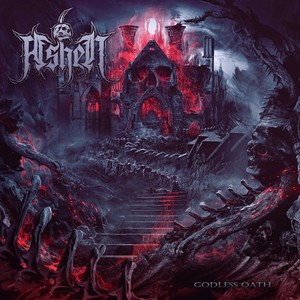 A new death metal act from Australia comprised of some experienced members within the scene, Ashen makes their debut with Godless Oath. Buzzing, thundering death metal that’s pure meat & potatoes for the ravenous death metal fanatic. And one that thankfully eschews old school worship, while still keeping the spirit of death metal at its purest form intact.

As a five song EP, the short length allows it to simply pummel as much as the band would like. The title track starts things off strong in this sense, with some rumbling, fuzzy riffs building up to launch a more full-scale mid-tempo assault. Complete with some melodic coatings for good measure (and catchiness), the track waits with anticipation to explode at the right moments outside of laying the groove on thick. The production feels more modern, and allows them to escape the old school label, even if their sound is still quite inspired by the roots of the genre. It’s thick and chunky, but it never feels dated. The pleasant surprise of the bulldozing bunch is that of “Asphyxiant,” where the band goes for a more atmospheric and dark sound than that of sheer brutality. It showcases a larger palette for the band to work with in future that still feels at home within the more aggressive tracks that surround it, like the throttling closer “Inferno.”

A welcome little treat for death metal fans, Ashen starts off with a band courtesy of Godless Oath. Lots of grooves to sink your teeth into, catchy melodies to attach to them, and of course, plenty of hard-hitting riffs and aggression to feed off of.