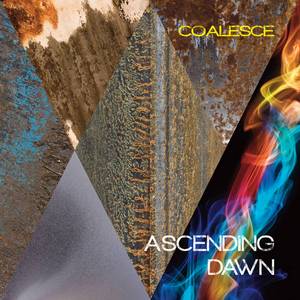 Groove-friendly progressive metal seems to be one the rise lately (one could even say djent-y), and even if Ascending Dawn’s Coalesce was initially released in 2014, it still fits in quite nicely with the movement. The worldly act (hailing from three corners of the globe) is a new and fresh one, yet sound like they’ve been in the game for some time. Particularly with a mix & mastering job from the quite fitting Jochem Jacobs (ex-Textures).

Outside of a few main go-to vibes, it’s tough to really nail down Ascending Dawn’s sound in words. The main elements consist of djent/progressive grooves and playful melodic atmosphere, but it hardly sums up the band in a nutshell. The way that they switch between bouncy, melodic riffs and serene atmospheres is quite elegant, and frequently the strongest points for the act. It’s tough to nail some of these types of transitions (as well as keep them interesting over time), yet cuts like “Miscommunication” and “Opposites” shine due to their ability to feel heavy yet still approachable and ‘chill’ in a sense. The progressive riffing style of a track like “Simplify” in one that rewards over time, and frequently different sections of songs ‘pop’ with an intricacy that only serves to fuel further investigations. Some songs are a bit more direction their approach, such as “Cannonball,” yet bestow an even stronger sense of melody when the moment strikes – a perfect opportunity for vocalist Marlain Angelides to take the lead with her equally stunning vocals. The juxtaposition of her vocals and the more aggressive riffs is something the music frequently thrives off of.

A definite sleeper hit for the prog community, Coalesce is a rich debut from Ascending Dawn that speaks well to their future. It’s melodic enough for a rock fan to dive into, yet has the unmistakable metallic qualities that the underground craves. Keep your eyes peeled to this act.