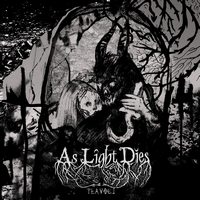 With all of the great music coming from all corners, Spain seems to be consistently nearly absent from the picture, perhaps owing to the language difference, but in As Light Dies, the Iberian peninsula now has a true champion in the world of top-shelf extreme music. No language barrier here, this avant-garde black metal outfit releases its third full-length album with The Love Album – Volume 1, an album which positions the band in line for some much needed attention – and accolades.

Dripping with atmosphere and rich tones all around, the band plays a pummeling-yet-unique and varied style of black metal which is enriched with violin, piano and keyboards, driven by thunderous drumming and capped with the excellent vocal work of guitarist and singer Oscar Martin. Oscar, balancing the album between his thick, harsh vocal lines and his soaring clean parts makes this album so much more than a black metal album with alternative leanings…it’s a dynamic experience, wholly contained in a snappy 35-minute deluge of emotion and musical bliss.

Mixed and mastered by the legendary musician/producer/metal god Dan Swäno, each minute of this opus is worthwhile, nothing wasted, leading on toward the crescendo-piece, the seven minute “Nemesis”, which represents everything great about this band in one awesome song. Potent use of samples permeate the album and drive home deep feelings of darkness, loss, fear and sorrow – yet give a strange sense of catharsis. These are used in a manner which might evoke similar usage in music by Sweden’s Shining, or even DJ Shadow.

Every so often (read: not often enough), for a record reviewer, an album comes along out of the blue and utterly delights said reviewer, by surprise. This is such an album. In what can be seen as perhaps 2014’s answer to Vulture Industries’ great release from last year (though much different and darker, the spirit is kindred), As Light Dies has created a true jewel in the crown of this year’s metal crop. Impressive is a gross understatement, this is one of the best of the year.