As I May – My Own Creations (Rockshots Records) 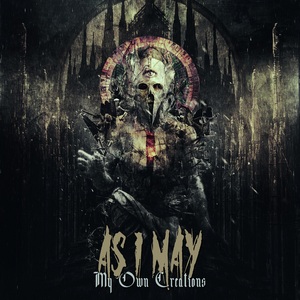 With the scene not really saturated with the ‘metalcore’ sound anymore, it’s interesting to see some bands starting or continuing to bring it along for a ride. As I May are quite rooted in the sensation, but like any eager band out there, aren’t simply going carbon-copy the original. So they have injected a larger electronic feeling into the music, which will probably make or break it for many potential listeners.

That said, with the larger emphasis on the electronic components, it brings what would have been more standard metalcore-like patterns into the times of today. The metallic parts have that melodeath meets pop-metal structure to them (even down to the shout/sing vocal patterns) and wouldn’t sound out of place among the All That Remains/Killswitch type bands that were sprouting up like crazy a decade ago. The electronics are well done and make a big part of the music up, without coming across as overbearing. The first two tracks, “Pride Goes Before a Fall” and “What a Waste of Life” really give you a sense of what they wanted to do with them, as bouncy and upbeat beats sit alongside some mid-tempo riff sections until they launch into a big ole chorus. Some are going to make mention that the electronics are a bigger part of the sound than the guitars/bass, and they aren’t wrong, but As I May knows what they are attempting to do and it’s also going to grab a few people as well (some of who may not be big metal fans). The more pressing concern is one that the metalcore genre has always been plagued by – a repetitive formula. It doesn’t take much effort to dissect down the band’s angle (heavy verse, upbeat chorus) and watch it be driven into the ground, even at only 30 minutes in length.

As I May do some interesting things in their attempt to spice up some of the older metalcore flavor on My Own Creations. But as they continue to sharpen their sound, it may not hurt to switch things up a bit more to throw the listener a curveball.