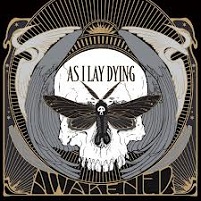 Nothing exciting doing here; As I Lay Dying basically resting on their laurels, eyes fixated on maintaining sales figures, tour billing, and so forth. Can’t really fault Tim Lambesis and crew, for they’re victims of their own success, one of the few metalcore bands to emerge relatively unscathed once the doppelgangers were wiped out. To lose this standing would probably mean the band would have to take some chances and left-turns, but alas, there are virtually none on their sixth album, Awakened.

In as much as Awakened is a new As I Lay Dying album, it’s really not that new…it’s a congenial rehash of 2010’s The Powerless Rise. The formula of punishing hard-to-the-core thrash mixed with Gothenburg joyrides is still being pushed to the max, with further help coming in the form of bassist Josh Gilbert’s clean vocals, which thankfully, have improved since The Powerless Rise. There’s no disputing how hard and heavy some of these songs are – just have a gander at opener “Cauterize,” where a Lambesis breath opens the floodgates for a beating, while all-world drummer Jordan Mancino gets in a workout.

Gilbert’s clean vocals are a major player on “A Greater Foundation,” which shouldn’t have to try very hard to whip the kids into a frenzy in order for them to still be able to fit into their stretch jeans. Yet, the main issue is that you can exchange virtually every song on Awakened for a song off The Powerless Rise, and even 2007’s An Ocean Between Us. The beatdowns are familiar, the chord changes run the same, and Lambesis’s positively barbaric tone hasn’t budged an inch since the band was climbing the ladder. A brief respite comes in the form of “Overcome,” a song that tries to usher in subtle dynamics for a change of pace, but alas, it hurdles itself back into Christian metalcore territory a little too easily.

The fact that As I Lay Dying has lasted this long could be considered a head-scratcher, although fresh ears to the band might get riled up over Awakened’srelentless nice-guy-by-way-of-Ameri-Sweden-metalcore bludgeoning. Any way you slice, we’ll be back at this point two years from now, ready for another album-tour cycle, with an album that will surely be a close cousin to its predecessor.