As Everything Unfolds – Within Each Lies the Other (Long Branch Records) 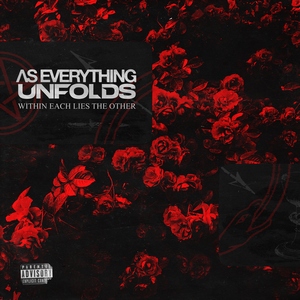 With two smaller releases behind them, As Everything Unfolds is set to make a big splash with their first full-length in Within Each Lies the Other. Now backed by Long Branch Records for this effort, the band has already settled into a fresh angle for their metallic onslaught, by incorporating a slew of elements from ‘core to rock and pop. Those seeking modern metal will no doubt be impressed by Within Each Lies the Other.

The key to As Everything Unfolds sound is really how the different elements come together to make for evoke different emotions. There’s moments of scorching anger that feature some frenetic riffing and fierce screams, such as that in “Wallow,” but the same track and turn a corner and have a more gentle and reflective moment without it feeling forced or overly saccharine. There’s a very genuine and heartfelt nature to the tracks as you move through them, even when they push into more pop/rock territory as in “Grayscale,” where gentle hooks are pushed up to the surface. But even here, the band isn’t against putting a bit of aggression to the tail-end of the track with a breakdown and harsh vocals to counter the more introspective body of the song. Even a more upbeat and driving track like “Stay” enjoys a solid bite to it, with some playful melodies and rumbling basslines catching the ear as well as a increasing heaviness as the track reaches its climax. The vocals do take a prominent position in an act like this, and Charlie Rolfe carries a strong blend of intense screams as well as more pop-infused singing and balances it well, having an emotive sincerity with cuts like “Let Me Go” or gentle urgency in “Take Me There.” But the difference here is the musicians surrounding her, giving a more cinematic feel to “Hiding From Myself” while adding ear-catching melodies that pop more on revisiting. This is obvious even on one of the album’s more quiet cuts in “Wither,” as you can dig back in and listen to the beautiful melodies and find a greater enjoyment in it.

Within Each Lies the Other has a feel that pulls it out the standard metalcore realm and unabashedly takes tools from other non-metallic genres to makes it into a thrilling, hook-packed ride that offers a fun genre-fluid experience with no shortage of depth. There’s an excellent foundation that should not only generate some buzz for the act, but act as a springboard to even better things in the future.

As Everything Unfolds – Committed to Art