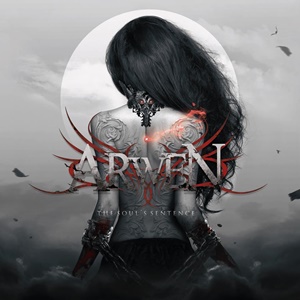 The third album The Soul’s Sentence from Spain’s Arwen comes 13 years after their last release on Arise Records Illusions. In that interim, it’s not as if the members were idle – performing with artists like Jeff Scott Soto and handling lineup changes as bassist Daniel Melián came in during 2011 and second guitarist Gonzalo Alfageme Lopéz entered in 2014. Finally locking down studio sessions in 2016, we have the final product released on a DIY basis – so let’s investigate into where Arwen resides as far as a sound and style today compared to their past.

Previous discography placed the band in more of a Dark Moor mold – containing dual male/female vocals and a power metal base. Now guitarist José Garrido has taken over the main singing duties – and his delivery and range takes a modern rock/melodic metal attack, although can stretch into some Labyrinth-like charm or raspy passages on “Us or Them”. Overall much of the songwriting moves to simpler groove-oriented chord sequences and complimentary tempos – allowing the band to step into some interesting interplay sequences that can be uplifting and swinging with lower staccato touches where “The Void” and “Crying Blood” intrigue due to the electric/cyber orchestration and modern feel to the performances. Conversely there are occasional glimpses of heavier sides where Evergrey-like crunch hits the mark, “When the World Doesn’t Matter” a midway album highlight in this regard especially as the riffs change from melodic to extreme and progressive again. The guitar breaks contain numerous technical sweeps, taps, and fleet of finger activities that appease those looking for sophisticated and well-trained work in that department. “Endless Burden” as the longest track at 6:25 appears to pull out all the stops, containing acoustic guitars, beautiful piano/orchestration, and stretches José vocally from lower, tender verses to theatrical/cinematic bridge and chorus lines.

The time away certainly has allowed Arwen to embrace more of their own take on melodic power/progressive metal, keeping things modern and open to an array of influences on the alternative, jazzy, or bluesy side while making sure to not lose hooks and grooves. And that could make The Soul’s Sentence a sleeper hit for those who do not want the typical take in this crowded marketplace.