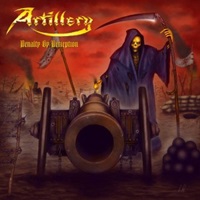 Better late than never to gain traction in North America – given all the interest in legacy and nostalgia, Danish act Artillery finally got to appear on these shores for two tours opening for Onslaught as well as a short headlining venture. Taking advantage of the renewed thrash mania globally, the quintet prove they are a step above the masses through their impressive twin rhythms, sharp riffing, and intuitive sense of hooks plus melodies which are often relegated to background versus the energy/speed quotient for most acts in the genre. There’s a reason why albums like Fear of Tomorrow, Terror Squad, and By Inheritance hit many metal critics lists for old school thrash favorites – but continuing to stride forward creatively, we get the band’s eighth studio album, Penalty by Perception.

The Stützer brothers who wield the six-string axe attack Michael and Morten obliterate through their wall crushing sonic tone – crunchy, gallop-oriented, and triplet-filled, it’s the stuff that put early Metallica on the map and the severely underrated Znöwhite/Cyclone Temple embedded into our brains decades back. Most will gravitate towards the harmonic brilliance throughout “Live by the Scythe” and the steamrolling “Cosmic Brain” as neck straining, hair whipping maneuvers will be the norm taking in these songs consistently. Drummer Josua Madsen and bassist Peter Thorslund also get a chance to lock into some more basic power/traditional rhythm section work, “Mercy of Ignorance” a mid-tempo anthem that picks up speed at times but then settles back into more of a “Can U Deliver”/Armored Saint feel.

Since 2012 Michael Bastholm Dahl has been Artillery’s vocalist, and the man has a soaring, confident presence that puts the band in more of a Heathen meets Maiden power category on that front than anything more scream or growl oriented. Check out those bird call high notes on the chorus for “Rites of War” or his versatile low to mid-range inflections during the exotic-flavored “Welcome to the Mind Factory” and you’ll understand his calling card, a true separator in terms of the Danes originality factor in the thrash genre. And the skull-cloaked reaper figure makes another cover appearance – cannon at ready to fire those who oppose.

A logical follow up to 2013’s engaging Legions, Penalty by Perception proves Artillery’s firm grip on a semi-technically advanced brand of thrash puts them in an elite but probable cult niche – which will be cool enough for those who want more musical bite and sophistication to appreciate.