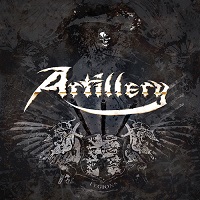 Peel back all of layers from 80’s thrash and somewhere sits Denmark’s Artillery. Mainly a cult quantity here in the States, the band is best known for 1990’s By Inheritance; beyond that, they’re pretty back-pocket considering how well bands similar in age have fared over the years. Yet with Legions, they’ve flipped the script, bucking the heads-down/don’t-think approach so many veteran acts take, opting to make a run for it with a highly clean and polished singer by the name of Michael Bastholm Dahl, creating one of the rare moments when the vocalist is the best part of a thrash album. When was the last time that happened?

Before we get to Dahl, it’s worth noting Artillery’s ability to line-straddle the various nooks between rambunctious t(r)ash (“God Feather”) and restrained, quasi-ballad territory (“Enslaved to the Nether”). Point being, is that there’s variety and it comes almost effortlessly. One doesn’t get the feeling Artillery are trying to fit a square peg into a round hole with some of these cuts, and it’s not like they’re lacking gusto, as heard on “Anno Requiem” and punchy “Doctor Evil.”

As for Dahl, he’s in command (if this were the dreaded Stryper, he’d be a “Soldier in Command”) of the charge, tasked with rounding up a worthy chorus, and the necessary energy to hang with the fast-tempo verses. It’s a duty most thrash singers can’t hang with, but it would be a reach to call Dahl a “thrash singer.” Rather, he’s a power metal vocalist cast in a band that obviously has a pretty good idea how to use him, which is why the opener “Chill My Bones (Burn My Flesh)” has such a draw; same with the Testament-like “Global Flatline.” And frankly, this might be the thrash surprise of the year. Didn’t see such a well-encapsulated, un-thrash, but-thrash album coming from these guys. Good stuff all around.