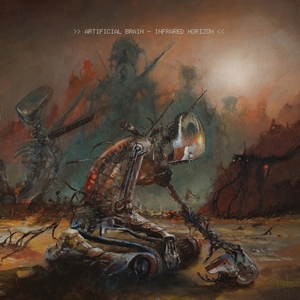 While space and the cosmos are becoming a more frequent source of inspiration for extreme metal, not every band seems to hit the mark. Much of the tech-sector provides a more sterile and pristine gaze into the infinite abyss, but occasionally you find a band that gives this topic a truly otherworldly and organic presence. One of the first names on your list in this regard should be Long Island’s Artificial Brain, particularly after you experience this intergalactic gem entitled Infrared Horizon.

Debut album Labyrinth Constellation set the bar high for the act, which they have decided to thoroughly smash into cosmic dust with this album. Filled with familiar components, it’s in the way that Artificial Brain weaves these pieces into something special that will leave the most lasting impact. Dissonance, brutality, melody – the three bases which Artificial Brain draws from – synthesize into an extreme metal album that feels more out of this world than a part of it. Small touches, like the fade out/fade towards the end of “Estranged from Orbit,” the crazed scream that opens “Anchored to the Inlayed Arc,” and the eerie effects that pop up in different locations (such as the end of the title track or “Graveyard of Lightless Planets”) only add to the foreboding and unsettling atmosphere the band designs. Likewise, Will Smith’s croaks and roars further contribute to the album’s dark and sometimes visceral impact. But there’s a sense of longing that also enters some songs, perfectly reflecting the elegance of the cover art, where sneaky melodic black metal vibes ensnare melodies that aren’t catchy in the traditional sense yet bring a distinct level of depth to return listens (see “Mist like Mercury”). Other cuts like the opener “Floating in Delirium” opt for more dissonant melodies, which contrast effectively with outbursts of a more brutal nature. The band never plays it straight either, requiring the listener to focus on the music at hand, with the notion that they could switch gears at any moment in time.

Infrared Horizon is a brutal display of complexity, dissonant melody, and unnerving atmosphere that should satisfy much of the extreme metal community. Few bands have put together such a chilling and bleak view of the galaxy at large. Not being able to be tossed into one particular category should serve the band well as they continue to expand things sonically and provide even more fertile ground to advance in. But for now, this is bound to be one of the strongest extreme metal albums you hear this year.