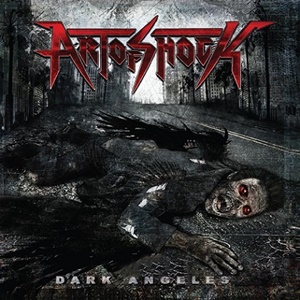 It’s not every day you hear of a band making the Warped tour in 2013 on a blind email to Kevin Lyman, willing to man the grill for post-Warped barbeques – but that’s the case for Art of Shock. Slowly grabbing prime gigs with Trivium, Sacred Reich, and Cavalera Conspiracy around Southern California put them on the radar screen of Century Media. Finally after a year of writing, rewriting, and recording – Dark Angeles is the quartet’s debut full-length, consisting of original material plus an interesting, out of genre cover that showcases a sound that’s semi-modern, very groovy, but also firmly in the thrash sector.

As brothers, drummer Adrian and vocalist/ guitarist Art Geezar have that intuitive relationship as far as performances – intertwining a mix of more modern influences (Trivium, Lamb of God) against the Bay Area works of Metallica, Megadeth and even the South American spirit of Sepultura. Those who love galloping, energetic numbers will find favor to “Declaration of War” – Art using a mixture of clean, commanding melodies (think more Sebastian Bach than necessarily thrash) and occasional venomous grit for his main vocals and given supplementary background support for key ‘war’ chants in the chorus. Thick, bouncy rhythms pulsate throughout the record, developing some serious energy even when they chose to lay back in mid-tempo stomp mode for “Final Strike” as Adrian throws in key double kick speed moments that would keep modern fans satisfied, allowing lead guitarist Nick Ertel to shine during the instrumental break with tasteful, bluesy notes that build out into some shred chops of neoclassical versatility. The record continues to move back and forth between the punk-infused speed outing “Bad Intentions” to something more Lamb of God/Trivium driven like “Glasgow Smile” that uses dual clean/scream voices and staccato-oriented rhythms that will drive crowds insane.

A commercial edge seeps into some of the vocal melodies Art delivers that could be hit or miss with more of the heavier/underground followers of thrash. The outside the box cover of Iggy Pop’s “Lust for Life” may be another head scratcher – the reinvention with crunchy guitars and a more straightforward tempo throughout the arrangement definitely makes it more of an Art of Shock song, but takes a bit of that swagger and distinction away from the original. In the end, Dark Angeles has enough of that original thrash attitude, adds in a modern fierceness, and could gain wider appeal from multiple generations of metalheads.