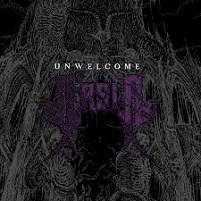 Still waiting for that elusive “next level” album from Arsis. While there’s some significant merit to both 2008’s We Are the Nightmare and 2010’s Starve for the Devil (two albums we championed), James Malone and his revolving door cast of characters still find themselves stuck in the unenviable rut of not quite being at headliner status, but far from low-rung opener. Maybe the scene gets just what it needs from Arsis and doesn’t crave more…we’re not quite sure. Either way, Unwelcome threatens to move the needle just like its predecessors…if not, more so.

The technical component that has come to embody Arsis’s sound is in full display here, starting with the rollicking title track and “Carve My Cross.” Here, one is greeted the band’s penchant for juggled riffs and high-velocity blasting, the type that may accentuate their musical prowess, but sometimes falls short in the song department. “Handbook for the Recently Diseased” emerges as the album’s swiftest cut, proving its ranging with a nimble chorus and Malone’s scathing rasp.

A cover of Corey Hart’s 80’s pop classic “I Wear My Sunglasses At Night” is pure novelty, even if extra kudos should go to drummer Shawn Priest for giving the song an extreme side that no one would ever fathom. Beyond that, cuts such as “No One Lies to the Dead” and “I Share in Shame” are sturdy progressive death metal exercises, spliced with metal and crisp solos from Malone and new guitarist Brandon Ellis.

Breaking down Unwelcome made this scribe ponder the forthcoming ten-year anniversary of Celebration of Guilt. As the album that served to break Arsis to the underground masses, there’s certainly an argument the band has yet to match its excitement and buzz. Unwelcome might not sway overriding sentiments on the band, yet, it’s highly probable Arsis are going to settle into a long, long run of productivity and quality.