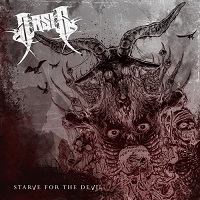 We’ll be the first to admit we got a little too carried away over Arsis’ 2008 effort, We Are the Nightmare. Perhaps hearing an American death metal band properly replicate the neo-prog death sounds of Death was too much for us to handle and sure enough, said album faded…fast. There’s a few reasons why We Are the Nightmare fell off our radar so quickly, but we’ll save some space and breath and point to Darren Cesca’s too-technical drumming and the shortage of snaky melodies. And whadda know: Cesca is gone and Starve For the Devil is stocked with melody. Boo-yah.

In the coming press swell, we’ll no doubt hear plenty about the album’s inspiration (singer

/guitarist James Malone dealt with a bout of anorexia), so we’ll shift our focus to the brimming, spiky riff-action that is going down across the album’s 10 tracks. Opener “Forced To Rock” rolls out a crisp, brilliant 80’s metal riff, while “A March For the Sick” displays a biting main riff that is instantly gratifying, world-beating, even. Returning drummer Michael Van Dyne proves to be tasteful, giving the album a steady anchor for the never-ending stream of riffs and good ideas galore.

Starve… falls more on the varied side than We Are the Nightmare and that’s on full display during “Beyond Forlorn,” a song

that employs a laid-back, almostSymbolic texture to it, only to burst into a massive chorus. The band’s melodic thrust is stronger than ever here as well, as “Closer to Cold” and “Escape Artist” build upon the early melodic foundation laid during the Celebration of Guilt days.

Come back to us six months from now to see how Starve For the Devil is holding up. If we were the betting type here at Blistering (and surely some of us are), we’d place our money on this album having a much longer shelf life than its predecessor. Arsis may or may not be the great white hope for American progressive death metal, but if they keep on releasing albums like this, one has to think they’ll start to crawl up the ladder, slowly picking off Atheist, Believer, and eventually, Cynic. But not Death.