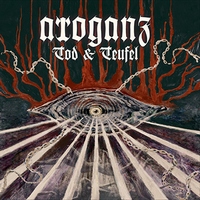 Admittedly, it’s a bit hard to get behind a band that uses a “z” in place of other letters (at least it’s not the “z” in place of an “s” that a number of bandz employ). Let’s face it, what type of band do you think of when you see inappropriate spellings (Korn? Staind?) Even more strange is the title, considering this is an old school death metal release from the folks over at FDA Rekotz. But oddities of the band name and title aside, this is some competent death metal.

The biggest strength of Tod & Teufel is that Arroganz never stick to one thing. The biggest issue that tends to come up with these old school loving death metal bands is that they just choose their favorite band (Entombed, Death, Dismember) and rip them off with no regrets. Of course, Arroganz comes off as death metal but they like to switch things up AND it’s clear they aren’t out to just copy one band and join the rest of the death metal heap. Some songs push things in faster directions, whereas a good number of them like to keep to a doomy or mid-tempo pacing (“Black Aura” has some wicked groove). Going along with the slower tracks (like “All Light is a Lie”), they keep the attention focused by not trudging along for no apparent reason but keep some solid dynamics in check. They also balance some melodies within their death metal structure, which is always a plus with the older approach. The vocals also mimic this approach, shifting between a more traditional growl with some higher spots here and there.

Name griping aside, Arroganz plays classic death metal the way it should be played. Never getting too complicated and offering a veritable bounty of songs that never feel like you are stuck listening to a second-rate version of your former favorite band. Not too shabby! 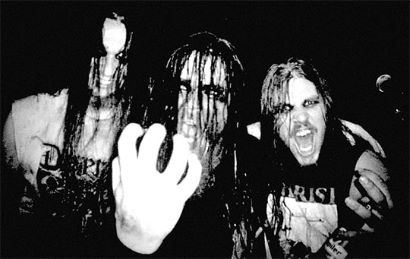