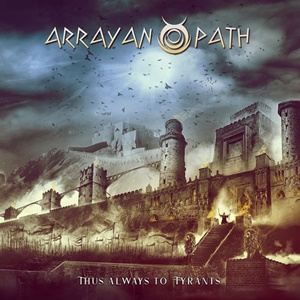 Actively following this Cyprus epic power metal act since their second album Terra Incognita in 2010, Arrayan Path arrives at the ninth studio record for Thus Always to Tyrants. A ‘true’ conceptual story that follows in chronological order as far as the track listing, these musicians tackle King Evagoras’ life – ruler of the Kingdom of Salamis in their home country of Cyprus during 411-374 BC. During his reign, he maintained friendly relations with Persia, aided Athens in battles against Sparta, and was a pioneer in adopting the Greek alphabet in Cyprus. You can expect the lyrical content to cover the battle themes, trials and triumphs, as well as the tragedies – while the epic power metal music sets up appropriate emotional, atmospheric shifts song to song.

The dramatic nature to vocalist Nicholas Leptos’ phrasing, note sustaining, and flair for the right melody in any low to higher register gains immediate bone-chilling kudos. Check out his work within “The King’s Aegis… They Came from the Taygetos Mountains”, where the mid-tempo Egyptian-laden guitar harmony components and swirling keyboards captivate in exotic ecstasy one moment, then shifting momentum into this thunderous tempo uplift as you imagine the visuals playing out before you. Hints of progressive intricacies pop in from time to time, the chugging guitars against free-flowing drum juggling maneuvers courtesy of Stefan Dittrich on “Crossing Over to Phoenica”, his knowledge of when to lay back into a groove versus going for broke on the fills/transitions key to garner that deeper level of intense connection over and over again. Longer releases like this (at 77 minutes with the two bonus CD tracks) need dynamic elements, and they pop in with narrative sequences, a power ballad for “Raid of the Achaemenids”, plus plenty of unison gang/choir activities to send peak messages home beyond the highly entertaining power riffs, killer lead breaks, and natural tension/action built into this style inherently. Guest appearances also take shape with members of Shadow Gallery, Warlord, and even lyre player Christina Polycarpou that accurately provide context in a natural way the glorious nature of this genre.

Thus Always to Tyrants may not necessarily bring newcomers to the fold – it takes a special kind of epic power metal follower to appreciate the painstaking work on all fronts that Arrayan Path deliver for this record and for their fans. In the end, it’s a testimonial treasure to learn more about this King in this manner, properly positioning this group as an upper tier act globally. 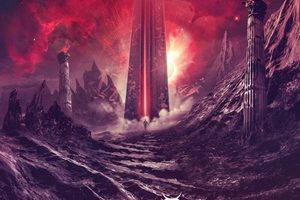 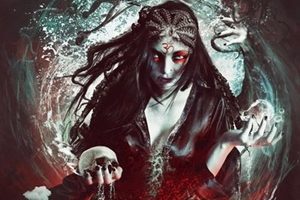 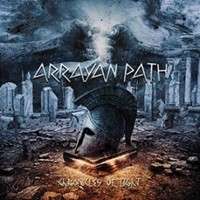