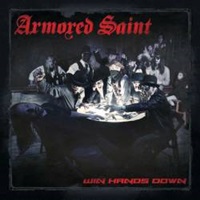 Critically respected, criminally underrated – that’s always been the mantra for Armored Saint in my eyes. During the 1980’s they could never breakthrough their initial “Can U Deliver” video ceiling- in retrospect a major label signing modestly built the profile of the band, as during the burgeoning thrash heydays, the more traditional sounding Saint was too heavy for commercial radio, and not heavy enough for the underground. Add in the death of guitarist David Prichard and John Bush’s jumping ship for Anthrax during the 1990’s and you can understand why Armored Saint is less of a priority these days – recording only when enough ideas are ripe.

Win Hands Down is the seventh studio platter for the quintet – five years beyond La Raza which for many ardent followers wasn’t prime time classic Armored Saint. The chugging Jeff Duncan/Phil Sandoval power chords signal the potent title cut right out of the gates, the arrangement high octane Saint like the Symbol of Salvation period where rabid energy comes at all angles musically and vocally, the mid-section at 2:42-3:26 giving your ears a solemn breather before killer leads volley like a professional tennis match. On the back end the half acoustic/half electric “Dive” is probably their most reflective, soul-searching ballad to date, John Bush reaching deep into his lower range for the proper feel and word pictures while the piano flourishes give the arrangement a haunting 70’s appeal.

One of the aspects rarely looked at for the band’s strong appeal lies in the long running rhythm section of bassist Joey Vera and drummer Gonzo Sandoval. They certainly know when to let the intricacies and subtle dynamic nuances fly – “With a Head Full of Steam” and future set list highlight “Muscle Memory” two examples of their importance. Never mind the powerhouse roar, grit, and metal to the bone voice of John Bush – his delivery one of the few in the genre that possesses instant recognition as “Mess” and highway cruising closer “Up Yours” add more chronicles to his legacy. Throwing in a few 6-7 minute arrangements gives these musicians a chance to showcase a little more instrumental might amidst their conventional traditional metal foundation.

To compare against previous discography, Win Hands Down crosses the adventurous Delirious Nomad period with the fiery passion and tenacity of Symbol of Salvation. A complete win-win and 9 songs that will gain copious airplay years and years beyond release. Welcome back to the march of the Saint.