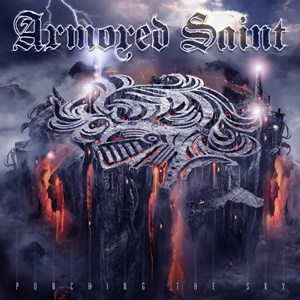 In an enviable position of releasing albums on their own timetable, Armored Saint seemingly fly under the radar for a straight-ahead metal band. Talent unquestionable (Metallica at various points in the 80’s wanting to poach both singer John Bush and bassist Joey Vera for their ranks – and Anthrax gained John for a bulk of the 90’s and early 2000’s), the band have been critical darlings yet never quite made the mainstream breakthrough most believed they deserved. Punching the Sky as the group’s eighth studio album keeps the train rolling, delivering an eleven-song record that features solid musical hooks, twin-guitar muscle, a versatile rhythm section, and the monster, powerhouse vocals of Bush.

The seasoning and experience allow the quintet to explore different parameters of their skill sets and incorporate them into a hard rock/metal context. Check out the mechanical textures for “Bubble” where bassist Joey Vera employs a bit of a thicker/dirtier feel, or the older 70’s Thin Lizzy-esque twin guitar lines against a cleaner, rhythm and blues groove for “Bark, No Bite” – the latter especially addictive with John’s ‘call off your dogs’ lower register refrain that matches that musical segment seamlessly. When you’ve been a band since the early 80’s and respect abilities and the brotherhood it creates, you achieve more as you are looking for the greater good of each song, creating standout interplay moments throughout such as “My Jurisdiction” from drummer Gonzo Sandoval’s slamming hits and subsequent lead sprinkling from axe men Jeff Duncan and Phil Sandoval that gets a bit progressive in spots and the powerful, semi-ballad “Fly in the Ointment” which proves John Bush is a top flight singer through his subtle melody choices along with proper elevation during the chorus. Adding in special guests like Dizzy Reed on keyboards and Patrick D’Arcy for the opening Uilleann pipes during “Standing on the Shoulders of Giants” allows for that dynamic touch to make the record even more special – but it always boils down to the main musicians on hand, and Armored Saint truly enjoy executing heavy metal in their own way time after time.

Settling into a comfortable five-year lapse between records, the world finally appreciates what Armored Saint brings to the table – an act infusing the best of melodic hard rock, heavy metal, and outside influences into something special. And that’s a rarity in a scene plagued with copycats and musicians chasing the latest trend. All the more reason to put Punching the Sky in a career defining position, reminding this scribe of the Symbol of Salvation period when they were firing high on all cylinders.