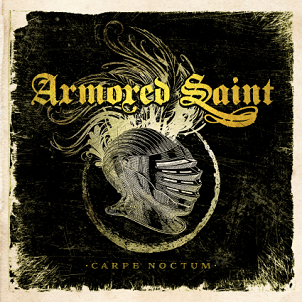 In a rare personal note, this scribe has the same hairstyle as Armored Saint singer John Bush. Us gents with a shaved head (out of necessity, mind you), tend to have a habit of rubbing each other’s bald domes as sort of a mating ritual. It has been a semi-goal for this scribe to do such a thing with Bush, something made increasingly possible by Armored Saint’s late-career surge. Since the release of 2015’s fantastic Win Hands Down, Armored Saint has made several treks across North America, warranting the creation of Carpe Noctum, the band’s first live platter since 1989’s Saints Will Conquer. (As an aside, Armored Saint has played Pittsburgh twice in the last two years. Bush and I have yet to rub heads. Perhaps one day.)

Consisting of the band’s 2015 set at Wacken and another in Aschaffenburg, Germany, Carpe Noctum doesn’t have the usual breadth of most live albums. At eight songs, there’s only time for the band’s elite jams, including the raucous “March of the Saint,” FM radio worthy “Last Train Home,” and two new(er) cuts, “Win Hands Down” and “Mess.” As per the usual, Bush reaffirms his position as one of metal’s undisputed singers. He’s every bit as vibrant and authoritative as he was when Saint were slogging it out in clubs in the ’80s, as so heard on the closing “Reign of Fire.”

It is certainly heartwarming to see Armored Saint enjoy such a resurgence at this stage in their underrated career. For a band that was consistently caught in the margins throughout the ’80s, their vitality–as so represented on Carpe Noctum–is a sight to behold. March on, saints.