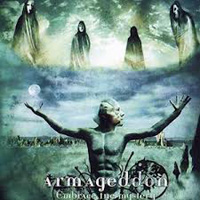 Once part of the W.A.R Records cabal that featured Eucharist, In Flames, and Darkane, Armageddon is the oft-overlooked former side project of Arch Enemy guitarist Chris Amott. Tracking down these albums has been quite the task, so credit Century Media for reissuing and repackaging these suckers together.

Musically, it’s a hair less feisty and showy than Arch Enemy, and is probably more in line with Firewind than anyone else. Had a typical death metal singer been fronting the band, Armageddon would be a non-descript melodic death metal band, but Amott’s surprisingly effortless clean vocals add a surprising dimension to the proceedings. He falls somewhere in between Graham Bonnet and your typical 80’s metal singer, if that makes sense. Check out his convincing performance on “Burn the Sun” for proof of the man’s abilities.

Of the two discs, go with Three, even if the brimming “Illusions Tale” is onEmbrace the Mystery. Vocalist Richard Bengstton handles duties on Embrace…and he doesn’t possess the innate charm that Amott does. Of the jams onThree, “Heart of Ice,” “Well of Sadness” and the vocal driving “Rainbow Serpent” are the ones to take home. Amott does dole out some flashy leads and drummer Daniel Erlandsson (also of Arch Enemy) plays it close to the vest, but nonetheless is rock solid.

Extras include liner notes from Amott and bonus covers including Iron Maiden’s “Die With Your Boots On” to Mercyful Fate’s “Desecration of Souls.” In all, this doesn’t fall into the category of being a mandatory find, but it is above-average, well-played melodic metal that might come as a shock to those who only know this Amott as the brother of that Amott.