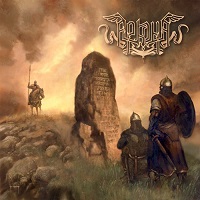 Korpkilaani has its booze, Finntroll has its trolls, Tyr has its Odin, and Russia’s Arkona has one of its own songs

in an episode of The Office. Hard to pick who the real winner is here, although Blistering would take trolls and Pam Beesly over booze and a mythological God any day of the week. Indeed the opening strands of the band’s “Yarilo” appeared in a 2010 episode

of The Office, which has long since jumped the shark. Thankfully, Arkona’s career seems to be taking a much different trajectory.

Slovo is the band’s sixth album, and by all accounts, is Arkona’s critical andcommercial

watershed moment. The quintet was able to land a cozy opening slot on Korpiklaani’s 2011 fall run, thus expanding their stronghold in the ever-messy folk/epic metal scene. And in terms of where the band stacks up next to the hundreds of armor-clad metallers, their homespun and fluid take on the style makes Slovo a minor success.

There’s a distinct orchestral and folk instrumentation load that Slovo carries, perhaps moreso than the standard fare folk metal band. It’s the bell cow for such tracks as “Bol’no Mne,” “Predok,” and “Zakliatie.” Singer Masha Scream gets a significant amount of air-time throughout the album’s 14 offerings, proving to be more than a support player (much like Eluveite’s Anna Murphy) on the joyous “Nikogda” and very polka-like “Stenka Na Stenku,” which would prompt both Finntroll and Korpkilaani to put on their dancing

shoes at a moment’s notice.

Outside of the fact they’re from Russia, there’s no primary differentiator between Arkona and the rest of the folk metal pack. However, there’s a certain zeal to Slovo that enables it to be more than your standard fare epic/folk/Pagan foray. Plus, no one else has The Office on their resume. Beesly is such a looker.