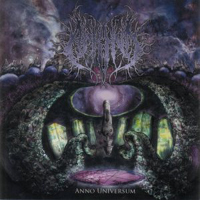 A bit misled by the cover, as it appears this fall more under the spacey black metal realm than straight, brutal death metal, but Oregon’s Arkhum like to go the unconventional route. Plus, this is a rare kind of release for the normally somber and explorative Vendlus Records. Nevertheless, on their debut Anno Universum, Arkhum inherits the ever-crowded realm of technical, all-out death metal, with halfway redeemable results.

Fronted by former Pathology members Kenneth and Stephen Parker (vocals, and guitars, respectively), Arkhum uses the lyrical platform of the cosmos and science fiction, something death metal can use more of. But when Kenneth Parker goes the super-annoying “bree-bree” vocal route, it’s all meaningless, and is an occasional deterrent to the grinding, murky proceedings.

Mounds of whirling and precise riffing comprise the bulk of Anno Universum, with the spare spooky intro on “Bloodgutter Encircling” breaking things up. Outside of that, the band primarily plays it close to the technical death metal vest, employing chunky rhythms on “Grief Urchin,” a Jeff Goldblum-sampled intro on “Obviated Geocentrism,” and black metal segues during “Nilpulse.”

No trace of trendy beatdowns or annoying keyboard interludes, and while Arkhum may not have the front of a technical death metal band because of their name and artwork, they’re clear-cut for this role. Nothing groundbreaking or innovative on Anno Universum; just a look into how robust technicality can still click within the confines of death metal without becoming watered-down.