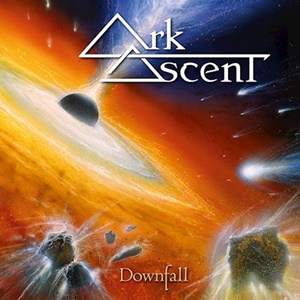 Featuring ex-Shadowkeep singer Rogue M and a current rhythm section with ties to DGM and Sirenia, Ark Ascent is a UK quartet originating in 2011 and fleshed out over the years as then 19 year old guitarist/keyboardist Jack Kirby took his time to develop the right players and songs to deliver this debut album Downfall. It’s evident that based on the players on hand, the band propels themselves into the progressive metal genre without banishing certain melodic and hook-oriented aspects on both the vocal and musical fronts so that they can capture a wider array of consumers.

The crunchier main riffing against some nifty time signature changes by bassist Andrea Arcangeli and drummer Michael Brush makes “Darkest Hour” a front half standout, Rogue using some spacious melodies during the bridge and chorus to heighten anticipation for the next musical passage. It’s evident that Jack and Rogue as songwriters come from a mixture of power/progressive backgrounds and influences – taking on the fluid, brilliant musicianship interplay of bands like Dream Theater and Symphony X and also injecting some AOR/melodic branches in specific harmony-laden choruses or softer interludes like the piano-driven “Farewell” and outer galaxy / space-vibe instrumental “Ascension”. Most of the songs keep to a sturdy, focused four-five minute template, but towards the end of the record the horizons broaden for “The Aftermath” at close to seven-minutes and the thirteen-minute plus closer “The End of Time”, where the longer instrumental sections serve up some intricacies and delightful propulsive interplay that can be majestic, powerful, and jaw-dropping.

The record has legs because of it’s diversity and ability to shift moods on a turn – Rogue M masterful at channeling his multi-octave register for all the right emotional needs, but it more of a semi-power ballad affair like “Innocence Lost” where he reaches some Tommy Shaw/Styx-like notes that send chills, or soaring to the heavens on “Point of No Return”. Ark Ascent aren’t going to be considered the most original progressive metal band down the pike – but they certainly assemble their influences in a context that musicians and non-musicians can equally gravitate and grasp this material.