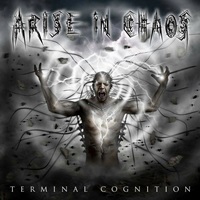 Five years in Denver, Colorado’s Arise in Chaos get scooped up by Megadeth’s David Ellefson for his new label EMP to release their second full-length Terminal Cognition. Gaining seasoning on the local circuit through opening slots for All That Remains, Soulfly, 3 Inches of Blood, Havok, and Motionless in White – they’ve had several member changes in the interim between 2011’s Civilization Decay debut and the current record under the critical lens, as vocalist Dustin Griboski and drummer Jer Matheson are the sole survivors from the quintet’s origins.

Groove metal of an American variety is here – employing a lot of modern tricks of the trade in terms of djent rhythmic shifts, caustic screams and low-tuned guitar hooks/breakdowns with squeals and echoing effects to heighten the intensity or aggression within the songs. A lot of the riffing has this shape shifting stair stack approach, occasionally injecting melodic hooks in the verses to create the most memorable portions of “Siren” and “Nero” in kind of a Machine Head meets semi-Lamb of God mold. When the grooves and breakdowns do come into play, you get the feeling that the band has listened to a decent amount of Trivium, metalcore and Soulfly, although Jer’s drumming along with the Nick Allen/Adam Landreth guitar antics also takes into account some classic Meshuggah poly-rhythm djent swings. Dustin’s sustained blood vessel bursts and lower but discernable extreme accents certainly put “The Divine” and the moodier “Reflections” away from more commercial ambitions – and would have landed Arise in Chaos on a perfect mid-level band slot during the Mayhem fest heydays.

Recorded in Michigan and gaining co-production help from David and Ill Nino/ex-Machine Head guitarist Ahrue Luster, Terminal Cognition is aggressive for certain and should gain appeal with the teen-twenty-something crowd – but doesn’t deliver enough distinctive, original hooks vocally or musically to really maintain any sustaining punch. The best acts in this genre have that “Davidian” or “Roots Bloody Roots” as that band anthem that catapults popularity, and as it currently stands Arise in Chaos only has fragments of hope in that regard.

Maybe all of the proper tutelage if taken under consideration could elevate Arise in Chaos’ profile – otherwise, Terminal Cognition is acceptable but fairly predictable in a crowded American metal scene.