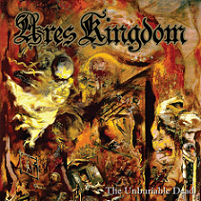 Part of the old, but quite savvy guard that isn’t obsessed with playing fast death metal all the time, Ares Kingdom have doing their thing since 1996. If our counting is correct, then that would mean the band would be at 20 years come 2016, quite the achievement for a bonafide underground, no frills, death metal band. Featuring current and former members of Order from Chaos and Blasphemic Cruelty, Ares Kingdom’s immovable, boulder-sized sound certainly has its merits across The Unburiable Dead, which is the band’s third full-length.

Relying heavily on balls-and-chunk, meaty riffs that eliminate guesswork (thank goodness for that!), the bulk of The Unburiable Dead finds itself in mid-tempo land. Because of that, songs such as the eight-minutes and change “Ubique” and the title track are instant ‘bangers, especially the title track, which boasts some of Chuck Keller’s heaviest riffing on the album. Lest we not forget to mention the slightly melancholic feel that works its way into some of the songs. It’s not totally prominent, but hanging around on “Nom de Guerre,” where Keller’s riffs hone in on the centralized feel of stoic doom. You could certainly make the connection between the two worlds; Ares Kingdom are coming from roots-based, but epic death metal. Doom metal in some forms, is the take-off of the same thing.

Uniquely underground and garnished with mounds of integrity, Ares Kingdom are one of death metal’s more unsung bands. Without that proverbial “go-to” album, the band has relied solely upon the strong word of the underground metal scene to carry their career into its 20th year. But given the strength of an album such as The Unburiable Dead, it’s not a stretch to think the band could last another decade…or two. Maybe even three.