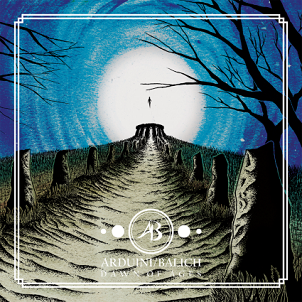 Tongue-twisting name aside, Arduini / Balich is the marriage between a progressive metal forerunner (Victor Arduini, ex-Fates Warning), and one of doom’s best pure singers (Brian “Butch” Balich, Argus). Looking to do something outside of his existing Freedoms Reign band, Arduini recruited the titan-lunged Balich for Dawn of Ages, a largely sprawling, doom-churned affair with plenty of twists, vocal heaves, and suitably crushing riffing. And to their credit, a Fates Warning/Argus mash-up this is not. (Not like it would be a bad thing, though.)

Balich is given plenty of room to operate here, just like in Argus, who have emerged as one of the more reliable doom bands in the last decade. (They’re also from Pittsburgh and rather nice dudes, so that helps.) For the uninformed, Balich has the fiery deliver akin to Karl Agell of Blind-era Corrosion of Conformity, along with the touch of classic rock/metal holdovers Ronnie James Dio and Graham Bonnet. When in tandem with Arduini’s gritty, but driving riffs (see: “The Fallen” or downright heavy “Forever Fade”), the results are quite enticing, particularly when Arduini tacks on some well-placed guitar harmonies.

Certainly long-winded these cuts are, as Dawn of Ages is at six songs and an over hour in length. Thus, the grueling Sabbath climb of “Into Exile” or the pure dungeon doom of “The Wraith” are patient and ever-building, kept in transit with Balich’s potent vocal hues and Arduini’s knack for winding compositions that never wander into pointless territory.

Three covers are tacked on to Dawn of Ages, the most notable being the band’s excellent rendition of Dio-era Sabbath’s “After All.” So yeah, lots to go around here from two seasoned, respected gents, coming together for a fulfilling exercise in passionate, convincing doom. May they have another go at things sooner rather than later.