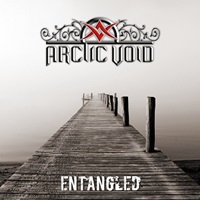 The proliferation of metal acts incorporating multiple vocal and musical styles to diversify their platform (as well as establish a wide reaching audience) has increased over the past decade. Probably a case of the internet age where studying the scene is literally within your download/streaming fingertips, the infusion of new influences has put a new generation group like Amaranthe as one of the latest leaders for the new generation. As such, surprise doesn’t hit my ears that a steady stream of bands will be attempting to use similar cyber/melodic power/death/dance-oriented cocktails as heard in this sextet Arctic Void with Entangles.

Ironically also from Sweden and beginning their career as Earthrise in 2010 before wisely changing names after lineup changes in 2013, the 11 song debut album has a penchant for modern power metal hooks, dual male/female vocal work that gains even bigger visions when joining together in harmony, and a lot of those electro/cyber keyboard elements and effects that make listeners jump and scream in glee. Commercial aspects come into the forefront in certain high octane Anna Samuelsson vocal choices for “Obsession” and “Who I Am”, the straightforward guitars and mid-tempo anthem stomp nuances perfect for Battle Beast aficionados. Smartly using the seasoned skills of Fredrik Nordström on the mixing and mastering gives the record a clear, sharp sheen – keeping the guitars of Per Stålfors and Peter Svensson a tad aggressive to give “Sleeping Under Water” and “Sacrilege” that heavier sheen over all the melody and hook factors that assault from all other angles.

Not always hitting the mark as some of the left field industrial / gothic curve balls just seem a little forced for differentiation sake (“State of War” the obvious offender here, the monotone/ scream vocals of Olof Lindgren yawn-inducing), the shorter focus on the arrangements assures listeners a quick hitting experience. Entangles isn’t the most original record to come into Dead Rhetoric these days – but the catchiness is undeniable, and will thrill those followers into Amaranthe and Battle Beast.