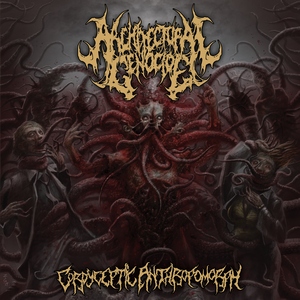 Initially, Architectural Genocide seems as straight-up of a review as they come. The gory cover art, tough as nails to decipher band name (even the title too, in this case), and Comatose label all promise something that’s slammy and brutal as hell. While none of these assumptions are too far off the mark, it’d also be wrong to say that Architectural Genocide’s first full-length is content to completely fall in line with the denizens of the brutal death metal community.

Cordyceptic Anthropomorph hits hard from the start, with a tasty thickness and dark tone emphasizing the riffs. Of course, the usual combination of chunky slowdowns and blasty upticks in speed apply – but Architectural Genocide also seem to have a bit of method to their madness. “Spires of Mangled Tissue” flows quite well in these moments, and keeps you invested. Follow-up “Hallocenogenic Demise” proves that the first track wasn’t a fluke, and in turn offers some eerie atmosphere in it’s opening to up the ante from the norm, until things crank up to barbaric riffing and blastbeats. Closer “Burgeoning Necrosis” also takes its time in opening, with mid-tempo and somewhat melodic guitar work taking over and giving the track some feeling from the onset. There’s also a slight tech piece that comes into play too, which thankfully never gets in the way of brutality (think more Suffocation in its execution). Again, aggression is front and center, with bludgeoning slowdowns in songs like “Gorge on Deceased” having an impressive flair to them.

Brutality is law when it comes to a release like this one, and Architectural Genocide grasp that concept, but also allow some more varied tactics than the average slam/brutal band to get the job done. Due to this, Cordyceptic Anthropomorph manages to hold the listener’s attention with ease while giving them the sonic pounding that they requested.