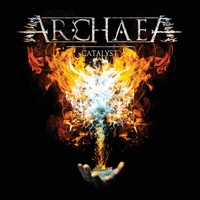 Swedish melodic death metal from the town of Gothenburg? You don’t say! Before you go all out with the cliché booklet, understand that melodic death metal has been on a bit of a decline in recent years (much to this writer’s chagrin) and Archaea don’t sound as Gothenburg-y as you might make the simple leap towards. Catalyst is a charming peek into what should be a promising band in the near future.

Catalyst is Archaea’s first full-length to show to the world. There are certainly classic melodic death metal vibes that you can find throughout the album, but equally important is the thrashy background on which many of the tracks are cut. This is combined with some background synths to create a more atmospheric center from time to time (see “Pyrochrysalis”) and occasionally some added darkness. Nothing really ever gets in the way of the guitars though, whose actions are often the front and center of the band (as it should be with this type of material). Biting, thrashy riffs on “Vacuum” blend with an almost circus-y (but not cheesy) synth to provide some solid bludgeoning, whereas dark melodies swirl around “Helios Ascend.” The surprising treat is closer “Sol,” which sounds almost like a Viking chant. The voices are almost the only piece to this song and it’s a nice 180 from the remainder of the disc. Proof that the band isn’t going to settle for genre conventions.

Fans of the darker and thrashier side of the melodic death realm would do well to give Catalyst a listen. While it’s not completely original, it’s a nice step in the right direction and there’s plenty of possibilities present to the band as they continue to move forward with their sound.