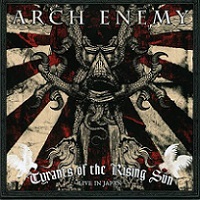 The first territory to embrace post-Carcass Michael Amott and Arch Enemy, it is only fitting our neighbors in the land of the rising sun get the live concert DVD treatment from the Swedes. Professionally shot in front a packed house in Tokyo, Tyrants of the Rising Sun is a strong complement to the band’s 2006 Live Apocalypse DVD.

Since vocalist Angela Gossow joined the AE fold in 2002, the band (rounded out by guitarist Chris Amott, bassist Sharlee D’Angelo and drummer Daniel Erlandsson) have gradually found their comfort zone within the melodic death metal style. Naturally, there have been some bumps along the way, namely half of 2003’s iffy Anthems of Rebellion and the over-polished Doomsday Machine, but AE has righted the ship with last year’s excellent Rise of the Tyrant.

Gossow is a charismatic figure onstage, which wasn’t always the case a few years ago. Now fully capable of keeping her wind and growl, Gossow lets it rip on “Ravenous” and some Johan Liiva-era tunes “Dark Insanity” and “Silverwing.”

Having Chris Amott back in the band after a two-year departure seems to have given the band a new lease on life, as his fluent, well-executed solos are often the staple of many a AE tune, like “The Day You Died” and “Night Falls Fast.” Other set highlights include “Enemy Within,” “Vultures” and “Burning Angel.”

A special features section includes a documentary of the band’s 2008 spring tour of Japan with interviews with all five members and candid shots of the devoted Japanese throng. Recent promo videos for “Revolution Begins” and “I Will Live Again” are also included.

Still very much a polarizing figure in the underground circuit, Arch Enemy is one of the handful of melodic death metal bands worth giving a damn about. And while some may be unable to look past Gossow’s persona and sometimes too-gleamy nature of the band’s albums, the jist of the matter is Arch Enemy is immensely popular for a good reason. And the Japanese were on to them first.