Arch Enemy – The Root of All Evil (Century Media Records) 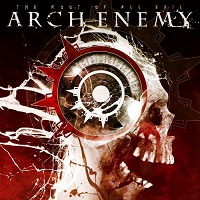 Many still hold Johan Liiva-era Arch Enemy near and dear, not budging from the stance that the lanky Swede is the definitive voice for Arch Enemy. This scribe has always been in both camps – Liiva’s and Angela Gossow’s. You know, it’s not like AE sounds drastically different with both singers

. They’re probably more professional and polished with Gossow and The Root of All Evil reeks of that.

The purpose of The Root of All Evil is take the Liiva-era albums and bring them up to date with Gossow. Aside from some minor adjustments musically, these are the exact replications of songs

from the band’s halcyon days. Gossow gives the songs a more frazzled edge, adding some depth to “Beast of Man” and “Pilgrim,” two songs she’s been singing on a regular basis.

There are some songs that simply don’t translate well here, most notably “Dead Inside,” which desperately needs Liiva’s healthy bellow; same for “Demonic Science.” “The Immortal” is fun and manic, like it always was, while “Bury Me An Angel,” “Silverwing,” and “Bridge of Destiny” hold up well in respect to the originals.

Created primarily to tide Arch Enemy’s fanbase over before their next studio album, The Root of All Evil won’t cause any long-standing supporters to ditch albums like Stigmata and Burning Bridges. However, the new fans (who still think Gossow is the band’s sole vocalist in AE’s history) will find value. Rewriting history is tricky…