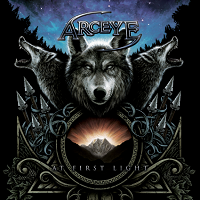 The U.K. has become a hotbed for modern thrash, housing lead dogs Evile and Sylosis, as well as the emerging Savage Messiah. All three are technically-proficient, yet fully aware of the style’s backlogged retro-wannabee roster, of which many folks have come to resent, DR included. Thus, the proliferation of super-clean production jobs, shredy-worthy solos, and he-man vocal roars are what make the above trio infinitely more fascinating than their less-capable counterparts. Looking to get in on the action is baby band Arceye, who are also from the U.K. Who also use Sylosis’s producer (Scott Atkins). Who also sound like the bands we just mentioned on their At First Light sophomore effort.

Maybe the real bone to pick is with Atkins, actually. He has constructed the sound of Arceye in virtually the same manner as Sylosis (A and B this album with Sylosis’s Edge of the Earth), so right out the door goes any chance of Arceye having an identity. Granted, they could turn all of that around by writing better songs, but the choices on At First Light are right square in the modern U.K. thrash wheelhouse – blazing triplets, the occasional melodic section, and minor-key riffs that when they want to (“Brother Disarmed”), dig in and start rolling.

The primary point of contention with At First Light and Arcyeye is that they have to follow the bands they inescapably sound like. Now, the U.K. thrash trio aren’t tried-and-true household names at the present time, but anyone with an ear to underground can figure out where the seemingly well-meaning lads in Arceye are coming from. And it ain’t America.