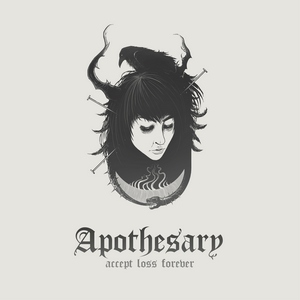 Interestingly, Apothesary released their debut, 2011’s A Harsh Reality, when the band members were still in high school. Without having heard said release, but it being six years later, it’s a safe guess that their follow-up, Accept Loss Forever see the act growing and maturing. Regardless, Apothesary make quite an impression with this album, particularly for those that enjoy melodic death metal bred with thrash.

Accept Loss Forever takes no time in hitting a full-on sprint, with the first few tracks really showcasing what they are all about. A melodeath/thrash hybrid that, while some may argue pushes the more modern end, keeps the melodic fireworks first and foremost. “Elizabeth” and “Sensory Overload” frequently take things firmly into the death metal realms of brutality, with an ear to the ground for melody. “Two-Minute Hate” is aptly described, with the band really pushing the thrash elements into the mix and crafting a brutal sound that’s sure to energize. The title track introduces some punk-ish attitude into the short song, with some rather strong melodies underneath it. Later, some clean vocals are introduced in “Knight” but not in a forced way, instead giving the band a breath of fresh air to cleanse the palette at the latter part of the album. The album ends with the longer cut “Expressionless Me,” where the more melodic trimmings collide with the band’s knack for heavier and more brutal assaults in fine form.

While the album starts in a more predictable manner, it’s to the band’s credit that they can toss in some curveballs along the way and keep Accept Loss Forever engaging and cohesive. They touch upon a number of different ideas over the course of the album, and only come across as better for taking a few chances. That same mentality will serve them well into the future.