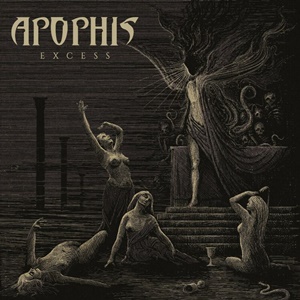 Originating as a thrash band under the Raise Hell moniker (different from the Swedish act from the late 90’s/early 2000’s on Nuclear Blast), by 1990 these Germans changed names to Apophis as well as styles, going the death metal route forward. They’ve released four albums to date – their last record I Am Your Blindness appearing in 2005. Which makes Excess a special album in their catalog, choosing to embrace an old school style yet using modern technology to capture a sound that is quite lively and vibrant to hopefully catch a wider swath of the underground (and above) into these eight tracks.

The trademark evil death tremolo/melodic guitar runs, pounding metal to the bone tempos, sadistic and discernible growls permeate this release – as if the band pick and choose aspects of Swedish death and European heroes from the 90’s/early 2000’s and intertwine those influences to fit their needs. Wasting no time getting down to business through the low-tuned chugging of the title track, the blasting transitions provide aggressive bursts of energy to seesaw against a Dismember-like mid-tempo arrangement, the diversity of semi-clean/scream dynamics as well as traditional guitar melody textures heightening the earworm elements of the opener. Never losing sight of the groove, it’s hard not think of Amon Amarth when taking in the marching aspects for “End of the Path”, while the steady drumming support during “The Show Is Over” keeps this classic 90’s-oriented outing a second half highlight, the crunchy, semi-stunted transition a headbanger’s delight. An atmospheric, mechanized intro for “Metamorphosis” provides short aural relief, the guitar riffs and drumming working in tandem to traverse that melodic death meets straight ahead death formula. Many times throughout the record beyond expected shredding sequences, the lead passages possess that additional throwback bluesy, emotive quality that separates newcomers from experienced, seasoned veterans. Guitarist Roger Kirchner captures a full sonic tonality as producer, while Dan Swanö masters the record in such a way that Excess can stand up to most modern releases while not sacrificing the grooves, brutality, and underground nature that put older death metal on the map.

Apophis may not necessarily be a household name in the death scene, but Excess will have quite a few listeners seeking out the back catalog.