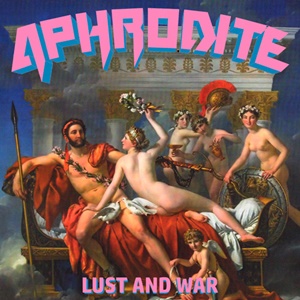 The Greek goddess of love and beauty in mythology, Aphrodite for the purposes of this review are a Canadian speed metal band who unleash quite the impressive debut full-length for Lust and War. The trio of musicians who deliver these eleven tracks rear back and fire off quick salvos of punk-infused heavy metal, certainly bringing to mind a lot of the raw energy that put many 80’s underground favorites on the map. Smartly playing off their mythology name to tackle tales from “Ares, God of War” and “Aphrodite, Queen of Lust” to “Theseus and the Minotaur” and “The Odyssey”, there’s so much unfiltered high-octane riffing, tempos, and equally racing vocals that you only gain minor reprieves before the next aural assault thrusts at you like a cavalcade.

Jo Steel as guitarist, bassist, and drummer holds down multiple responsibilities like a pro, the bass work for “Lightning Crashed” a standout in that pumping Agent Steel-like manner, then coming back to a relatively controlled with progressive touch delivery on the follow-up “Penthaselia”. Yan Turbo wastes no time blazing away in the lead department out of the gate while sprinkling his fleet fingers at various spots of opener “Hades in the Night”. Most will be charmed and captivated by the punk-edge meets soaring melodies from singer Tanza Speed. Originally from Chile and moving to Canada in 2011, her up and down register often mirrors the riffs to a tee (“Ares, God of War” specifically) or can be mysterious in a Stacey Peak / Savage Master way for “Orpheus Charms the God of Death”. Most ardent historians of metal can pick out specific influences: Acid, Znöwhite, and Agent Steel the obvious ones, but as stated above there’s a strong punk/early Motörhead flavor to the get in/get out execution of this material.

Are there times where certain leads go astray and feel like notes fluttering in the wind? Of course – looking at “Theseus and the Minotaur” here – but once again Jo’s infectious bass plucking saves the day. The record finishes as fast as most of Aphrodite’s songs in an economical 36 minutes. Lust and War is not the most original take on 80’s speed metal – and yet it’s sure a thrill ride that’s hard to put down once you begin listening. 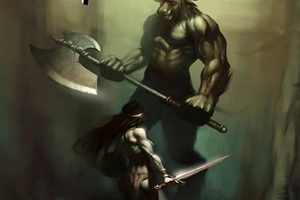