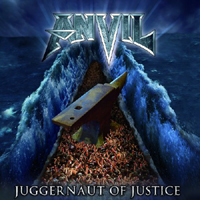 Lovable yet predictable, one would be hard-pressed to find fault with the tenacious nature of Anvil. Since the release of their documentary (Anvil: The Story of Anvil) in 2009, the Canucks have ascended to never-before-seen realms of popularity, something the band surely hopes to cash in one with the release of Juggernaut of Justice.

This is pretty low-brow stuff, but infectious at the same time. The band (and specifically singer/guitarist Lips Kudlow) is stuck in the classic metal wringer, and there’s little straying it from it here. There’s the expected “rah-rah” fast-paced opener in the form of “Juggernaut of Justice,” the brooding fist-pumper in “New Orleans Voodoo” and up-tempo rocker about uh, “rocking out” with “On Fire,” which is probably the best number of the lot.

Some stink was made about the album having some form of big-band “swing” to it, but it’s a total afterthought, save for “Swing Thing,” which is the last song on the album (drummer Rob Reiner is a beast, though). Aside from that, mindless songs like “Turn It Up,” “Fucken Eh!” and “Running” are fun and disposable at the same time, which has been par for the Anvil course throughout their career.

Still riding the wave from Anvil: The Story of Anvil, Kudlow and Reiner are operating at their most professional level, something is readily apparent upon further inspections of Juggernaut of Justice. Expertly-produced by Bob Marlette (Alice Cooper, Ozzy, etc.), Juggernaut still can’t escape the claws of the juvenile nature of Anvil itself. But that’s the catch – anything more highbrow from Anvil wouldn’t be…Anvil.