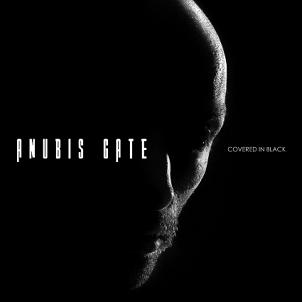 Since bassist Henrik Fevre assumed vocal duties in 2011 for Danish progressive metal stalwarts Anubis Gate, the band has effectively been rebuilt around his voice. The band’s 2014 Horizons was one of the better vocal position transitory albums in recent memory, as the Danes successfully combined their always-hummable, yet stout technical range into a gripping set of numbers. Their new seventh full-length outing Covered in Black follows the same trajectory, albeit, in a much darker fashion.

As noted by the band, Covered in Black is “dealing with, and dedicated to, people in dark places, this album has a darker and more complex edge to it.” That certainly rings true based on the album’s first two numbers, “Psychotopia” and “The New Delhi Assassination,” the latter of which works in a combination Middle Eastern melodies into the band’s rangy progressive base. Subsequent cuts like the urgent “The Combat” and “A Journey to Nowhere” are the biggest indicators of Fevre’s influence on the band’s sound. On “The Combat,” he turns in a high-flying, near-showy chorus, somewhat recalling Dream Theater’s more buzzed-up vocal choices.

The back-to-back “Blacker” and “Blackest,” though, are what makes Covered in Black. “Blacker” embroils itself in cinematic, dark prog, while Fevre unleashes a multi-track vocal display. “Blackest” emerges as the album’s most accessible number, as lush melodies and careful guitar chords work underneath, all within the function of a song that clocks in under three minutes.

Anubis Gate happens to be a unit that has only increased its capabilities and range with each successive album. Where Covered in Black succeeds in ambition, it’s met with a sterling grey undertone, the type of augmentation that few bands can pull off. As such, Anubis Gate remains one of progressive metal’s most unique and daring bands.