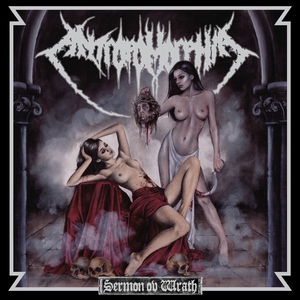 Three years following up their last album (Rites ov Perversion), Antropomorphia rolls out some of the usual tropes for their latest, Sermon ov Wrath. Just as before, you see that nudity runs supreme on the cover and continued use of “ov.” But with the three year wait, how fares the music within the package? In that regard, the band has pleasantly taken some forward momentum.

Where Rites seemed to lack some passion on the riff front, Sermon ov Wrath comes across as a more well-rounded and interesting release. Not to misconstrue anything, as Antrophomorphia still play death metal through and through, but the energy is more lively. The ace in the hole for the band has been the ability to come across as pure death metal – no need for additional adjectives or a world map necessary for further description. That continues to be true here, and there seems to be a conscious effort to add more depth to the music. Atmosphere aplenty on tracks like “Crown ov the Dead” (complete with some female vocals) and melancholic opening to “Within Her Pale Tomb ov Putrid Lust” gives the impression of some experimentation, as does some more sleekly introduced melodies within the overall scheme of things (see “In Bestial Decadence”). While they may be noted as small tweaks to an overall formula, one can’t deny the positive effects that they help to create over the course of the album.

Within a crowded death metal marketplace, Antropomorphia does exactly what needed to be done to make a bigger name for themselves. Combining an effective death metal attack that is as pure as it is lethal, but combining some more atmosphere and melodic underpinnings give the band a leg up on a number of their peers. With continued evolution, the next album could be the charmer from these guys.