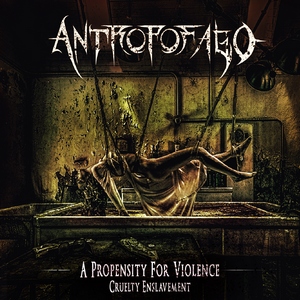 French brutal death metal act Antropofago have released two previous full-length albums and a few smaller releases in their career, which spans back close to 15 years at this point. For this third full length, the band has taken their 2018 EP A Propensity for Violence and combined it with a few new tracks (hence the combined name). All in all, a brutal but memorable time for genre fans.

Brutal death metal is what it is. It provides a gut-punch of heaviness and tends to prioritize that over the other aspects of the music. Therefore, the piece that ends up being the most surprising about A Propensity for Violence is the amount of hook-based rhythms the band manages to toss into the music without slowing down the otherwise scathing assault. The usual tactics are here, with fast and frenetic riffing and drumwork being the bread and butter, but some slower grooves too in order to up the diversity and give some momentary restraint from the furious speed. Antropofago is well-versed in the groovy aspects, and the band tends to operate at their most memorable when they slow things down for a more mid-tempo pacing, such as on “The Eyewitness.” It’s thick with heavy grooves, even with battering drums behind it, and it creates a more boisterous sound than when they simply attempt to go full-tilt on the accelerator. That said, this sort of music does require that blistering speed to satiate the adrenaline rush, and tracks like “Antinferno” and “Horror Prevails” are happy to dish out this sort of thing. With an undercurrent of some technical stuff underneath, it holds these moments together better as you can get a good dig into them to listen to the intricacy on repeat listens instead of merely relying on the speed alone. Thus, the combination of punishing grooves and slightly intricate riffing keeps the whole thing impressively memorable. To the point that a 43-minute release of this nature never feels dull or too repetitive.

Well-written brutal death metal that doesn’t rely solely on wowing the listener with tech stuff or just bludgeoning them to death, Antropofago have a winner with A Propensity for Violence…Cruelty Enslavement. It doesn’t remake the wheel, but the level of shine and polish that has been poured into this release is quite impressive.