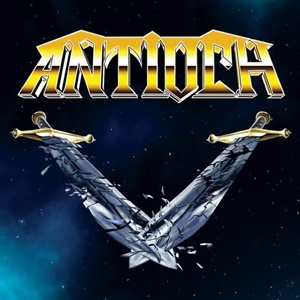 Part of the fertile metal landscape of the Great White North, Antioch arose in 2013 to profess and deliver on their classic metal influences. Since their inception, they’ve released three full-length albums and an EP – landing drummer Brendan Rhyno back into the fold after a three-year absence from the group. V is the latest five-song EP for the trio – rounded out with guitarist/bassist Jordan Rhyno and vocalist Nicholas Allaire. Aware of their formula not exactly blazing trails, expect a mixture of melodic hard rock and tried/true heavy metal with a boatload of 70’s and 80’s haymakers thrown about through the hooks, attitude and choruses that will lead to conviction for most ardent followers of the original movement.

The guitar work has this evil nuance at times that matches the mysterious, creepy nature to the phrasing and lower/mid-range delivery Nicholas employs at times. He can be very Alice Cooper-like during the verses of the 7:25 epic “A Façade at the Third Castle” before the pace picks up and his upper register shrieking conjures up a montage of Rob Halford, King Diamond, and Jon Oliva gone slightly awry. Jordan has an intuitive sense of when to shred or go for a catchy power chord sequence – the mid-tempo Accept/Sunset Strip riff choices against the hip shaking groove template for “On a Ledge” a standout, probably would be an early 80’s hit on most national rock stations had the song appeared back then. Specific drum rolls, stunted rhythm guitars, the layers of build up into the big chorus pay off – it’s evident these gentlemen have studied the greats and wish to add their own takes to today’s revitalization of the style. When they choose to be a little more bluesy/boogie-oriented for the closer “Cloven Hooves”, you still can feel the alcohol overflow and sense the energy penetrating your speakers – it’s as if putting W.A.S.P. in more of a metal framework.

Are there times that things are a little loose and maybe off the cuff? Sure – Nicholas has at times a bit of a screechy nature in his highest screams that may not go down well for certain purists. In the end though, Antioch is heavy metal to the bone, and V keeps this Canadian group on the bubble for solid steel anthems in 2021.