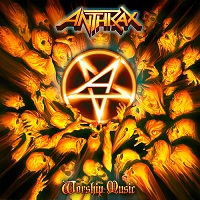 If you just did a double-take in regard to the rating to the left, we don’t blame you. Anthrax was essentially dead in the water as little as two years ago (something we noted in this not-so kind editorial) after the unceremonious dumping of singer Dan Nelson, the mishandling of John Bush, and the eventual re-entrance of Joey Belladonna in early 2010. That’s three singers in the span of two years. Ridiculous. But none of that matters now, for Worship Music is insanely good. Like, shockingly good in the sense that it could very well be the band’s best album since 1987’s invincible Among the Living.

Kudos to the band for not dumbing things down and going the straight-thrash route. It would have been such a cop-out to have an album with thrash beats and blatant nods to the past, but there’s not a whole lot of that here. Instead, Belladonna steals the show. Thanks to his constant tour schedule with his solo band, Belladonna’s voice is in top shape, enabling the man to belt out some ravishing chorus choices on “I’m Alive” and “The Devil You Know.” The dynamic vocal hooks on “The Giant” and “Judas Priest” are among the band’s finest ever, even counting some of John Bush’s better moments like “Safe Home” and “Bare.”

In light of the previous comment about not going the straight-thrash route, the grooves laid down here are at times, pummeling. The above-mentioned “The Devil You Know” has a great free-wheeling verse, while the chugging heard on “In the End” and “Crawl” mesh quite well with the fast-paced “The Devil You Know” and “Fight ‘Em Till You Can’t.” Perhaps the biggest winners here are drummer/primary songwriter Charlie Benante and guitarist Scott Ian, who have finally put together a cohesive batch of songs with a sonic consistency that hasn’t been heard from Anthrax in years. There’s not a bum track in the lot.

Bear in mind that Anthrax has a way of shooting themselves in the foot, so this incarnation could be short-lived if someone is rubbed the wrong way (read: Belladonna). However, Worship Music has to be the first album the band can stand firmly behind without paying us the usual BS-line of “This is our best album to date.” For once, no one is going to argue if someone in the Anthrax camp says something like that. This is the best album to come from a “Big 4” band since Slayer’s Divine Intervention.