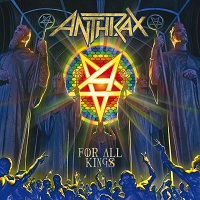 Dispute as you may, but Anthrax’s 2011 Worship Music was the best album released by any member of the Big 4 in the last 25 years. The revitalization of Joey Belladonna, the ten-ton/accessible riffs, and the superior pacing of the album came as quite the shock to the system considering the lineup issues that befell the band over the last decade. Musically, it made Anthrax more relevant than their peers. Therefore, not wanting to stumble with the oh-so-crucial follow-up, the band took their sweet time, emerging with a batch of songs in the form of For All Kings that keep the needle pointing firmly in the right direction.

Early word from the band came that the songs were to be faster, which is partially true. The familiar batch ‘o ingredients that populate “You Gotta Believe” and “All of Them Thieves” hold up the traditional end of the bargain. However, the searing, mid-tempo romp and stomp of “Monster at the End” gives For All Kings its obvious lead single, even if the so-so “Breathing Lightening” may get the nod. Here, it’s all about Belladonna, who much like on Worship Music, turns in another winning performance, especially on the aforementioned “Monster at the End,” a song that boasts quite the gusto-going chorus.

Elsewhere, “Zero Tolerance” hitches itself to the band’s State of Euphoria era, most notably in the song’s devilish mid-section. More melody is to be found among “Blood Eagle Wings” and “Voice of the People,” while the manic, roundabout “Evil Twin” closes the proceedings.

Anthrax didn’t necessarily have to hit a grand slam with For All Kings, but it’s clearly a home run. (Sorry for the baseball puns.) There’s just this freshness and energy to them at the moment that some of their legendary thrash peers simply don’t have. For All Kings makes for two late-career triumphs for Anthrax; very likely they’ll make it a third down the road.