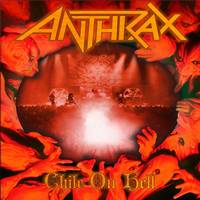 Based on the visuals produced via Chile on Hell, veteran American bands would be advised to shoot their live forays in a South American and/or European country. The convenience factor of shooting in the States is nice (see Testament’s Dark Roots of Thrash), but the overall intensity and fervor of these crowds makes our Yankee crowds look like we’re at Wimbledon eating strawberries. And so with what should be the last release to coincide with the Worship Music album cycle, Anthrax ventured to Chile for the recording Chile on Hell, which captures new lead guitarist Jon Donais, along with a nice bag of Among the Living cuts, and recent and older jams.

Five consecutive Among the Living songs open up the track listing, the last of which, “Skeletons in the Closet,” is perhaps the album’s best, disagree if you will. Unlike some of their contemporaries who shall go unnamed, Anthrax doesn’t slow down their faster songs (see: “Caught in a Mosh”), so the natural punk spunk and aggression is still there, further aided by Donais’s excellent leads, an obvious improvement over the recently-departed Rob Caggiano. Worship Music songs like “In the End” and “I’m Alive” are equally as entertaining, displaying Joey Belladonna’s remarkably able and fluid vocal delivery. The goof-troop rapping of “I’m the Man” aside, the raucous “Madhouse” and fun “Antisocial” are perfect set closers, of which the Chilean crowd ate up.

Little in terms of extras, although backstage, interview, and additional footage is mixed in with the running order. So really, Chile on Hell is a nice bow to Worship Music, an album that effectively put Anthrax on top of the Big 4 and returned them to prominence. One could understand why a follow-up is taking so long: The band has every right to milk and/or bask in the glow of the success of Worship Music. Can they do it again with a proposed new album in 2015?