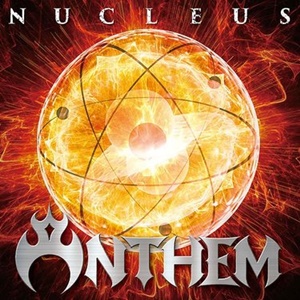 Anthem hail from Japan, and probably will gain only a cursory glance from our North American readers as far as name recognition even though they’re on the cusp of celebrating their 35th anniversary together as a group. Reason being – lack of US distribution for their discography, which is a shame as along with Loudness, Vow Wow, and Earthshaker they deliver a potent form of melodic heavy metal. Nucleus as such could be your primer to the best of Anthem – an English re-recording of their biggest hits, given a modern polish on the mixing/mastering front by Jens Bogren.

The sound/style of Anthem incorporates a mixture of influences that can be melodic hard rock one moment, then neoclassical and power metal driven the next. Guitarist Akio Shimizu revels in that ‘hero’ mold, his choice of riffing and hooks sharp and filled with the tricks, taps, and sophistication to keep the frets burning on highlights like “Immortal Bind” and “Stranger”. Comfortable sitting in a Judas Priest-Painkiller mode for the mid-tempo “Black Empire”, they’ll also flash a bit of Accept meets Dokken street groove action on “Linkage”, while bassist Naoto Shibata adds a bit of bottom-end bluesy finesse on the almost eight-minute effort “Ghost in the Flame” – carefully opening up some of the soulfulness in singer Yukio Morikawa beyond his obvious higher range proficiency. Because the record tries to capture all angles of Anthem from the 80’s, 90’s and 2000’s forward, you’ll get 14 songs where there are many reference points to inspiration (Akio’s ability to channel “Crying in the Rain” during the lead break for “Ghost in the Flame”, or his love of George Lynch on “Awake”) – but everything is put together in a solid, tasteful and polished metal manner. Yukio as a singer reminds me a lot of Graham Bonnet minus the man’s upper screaming intensity. His English is very intelligible and he does his best to passionately keep the power melodies flowing – “Black Empire” and “Echoes in the Dark” very endearing examples of his smoothness.

Imagine a mix of melodic power metal with neoclassical/hard rock flashes and that will clue you in to the consistency and professionalism of Anthem. Nucleus should help the band’s profile stateside – and hopefully encourage Anthem to continue seeking out worldwide distribution for their future records, as they should be more than a European/ Far Eastern sensation.