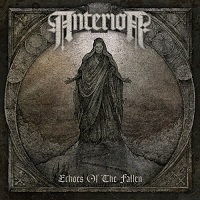 You know, if this were 2003, people would be all over Anterior. They’re everything that stoked the fires of the new American metal movement (the band is British, though), possessing flashy leads, scream/shouted vocals, and traces of hardcore. So essentially, they’re a British version of Shadows Fall, minus the mile-long dreadlocks and occasional dosage of clean vocals. Oh, and they probably won’t have the career arc that Shads Fall had. Too late for that.

On Echoes of the Fallen (their second full-length), the Brits are quick to let the leads fly, as the guitar tandem of Leon Kemp and Steven Nixon have ample room to dole out solos. Initial listens make the solos the predominant trait here, with opener “To Live Not Remain” and “Blood In the Throne Room” boasting mounds of tasty, near shred-tastic soloing, thus beefing-up the band’s over-played sound.

The band’s tight grip on melody manages to keep songs like “Of Gods and Men” and “Sleep Soundly No More” (both of which have oddly the same melodic passage) afloat, although this is a song and dance we’ve heard too many times. Anterior is too quick to deviate from any thrash leanings they have, preferring to drop in staccato riffing that keeps their hardcore elements intact. It’s something that was beaten to death over the course of the middle part of last decade, and frankly, there’s no way anyone can make it sound fresh, regardless of how well the Brits can handle their instruments.

Bands like Anterior will forever find themselves behind the proverbial 8-ball simply because they’re way too late to the party. As we stated above, an album like Echoes of the Fallen would have gone down in a storm roughly 10 years ago, but like anything in metal, over-saturation ruins everything. Especially would-be good bands like Anterior.